It has been a while since our last update. And not because the project has stopped, but quite the opposite! We have been experiencing quite busy months since the begging of the year. At this point, we have reached the final phase of testing in Abengoa’s facilities in Seville (Spain). And in a couple of months, and if Covid-19 allows it, the plant will be installed in the final site in Delfzijl (Holland), where it will remain operating for 5 years. So, lets go into details on what have been accomplished so far.

During the initial months of testing, we focused on the plant itself without having the fuel cell stacks installed. In this period no power was produced, allowing us to optimise control strategies and check for improvements without worrying about damaging the delicate stacks. Many different tests were carried out including the initial commissioning and functional tests of individual equipment. Most tests fall into the category of these three main types.

As with any other plant, commissioning comes first to ensure the correct functioning of all equipment and sensors. Several steps are performed :

Once all the components have been tested individually, it is time to start the subsystem functional tests. Apart from the development of new fuel cell stacks, the project aims to design an efficient plant that protects the stacks to expand their lifespan to the maximum. Including a dynamic, fast and pressurised operation. For that, a precise control is required. Testing each subsystem before the stacks are installed is therefore critical. It allows to test without worrying about damaging the stacks.

Combines flow, pressure, temperature and humidity control to provide the best possible conditions of air and hydrogen to the stacks. More than 10 control loops and variables intertwine with each other. Advance control techniques such as smith predictors and multi-variable control were needed to accomplish all targets.

Since heat is provided by the stacks while generating power, thermal response of the plant was simulated to adjust the control. Moreover, other test were carried out as safety Nitrogen inertisation, auxiliaries consumption measurement, environmental control and anti-freezing features…

Starting from the programming already developed during construction, a lot of effort and time has been invested into validating and updating it. With special effort on the HMI (Human machine interface), a key part of a correct plant operation.

One of the main topics that come to mind talking about Hydrogen Power Plants is safety. Hydrogen has sometimes a bad reputation of being dangerous. But, like any other fuel like natural gas or diesel, by making the adequate engineering decisions and following the safety standards created by industry experts, safe operation is assured. This is nothing new, many conventional industries have been safely working with Hydrogen since long back. And their experiences, with further innovations, are applicable to Hydrogen Power plants. In Grasshopper, safety has always been a core engineering focus, and of course, during testing even more. The safety analysis is, as a consequence, a continuous process that starts at the engineering phase, follows the construction, and finalises “as-built”.

Verification of Intrinsically safe cabling and other ATEX certified equipment

PEM fuel cells are permeable equipment, this means that there is an unavoidable leakage of Hydrogen around the stacks. This is usually called the stack’s “breathing”. Because of this, is very important to minimise and characterise the leakage rate of the system while the stacks aren’t installed. In any case, if anything happens that creates a hazardous atmosphere, fixed Hydrogen detectors are always monitoring the container. Additionally, hydrogen detection tape is installed around possible leak points for maintenance revisions.

Several layers of control ensure a safe operation. Not only for personnel protection but also to minimise damage to the equipment in a “loss of control” event. If Hydrogen is detected inside the container, an emergency shutdown is performed. This eliminates any possible ignition sources maintaining ventilation. More over, the hydrogen subsystem is immediately inertised with Nitrogen.

Characterization of air renovation flow inside the container.

An interesting aspect of the safety analysis done for the Grasshopper is the study of air flow inside the container. From the beginning , the plant was designed to promote a preferential flow of fresh air that would carry any possible leaks away from potential ignition sources, quickly out of the container. During the testing phase, these initial engineering decisions were validated with a real flow analysis of the air inside the container. With over 30 points of measurement, we could characterise the air flow speed, direction and variability with ambient conditions. Creating a clear image on how the renovations of air displace and mix within the container, and where pockets of Hydrogen could potentially create when a leak occurs. It is basically like performing a “real CFD” with the plant itself.

One of the main objectives of the project is participating in the reserve electric markets. To do so, a flexible and quick response of the plant is essential. As mentioned before in the process section of this article, it is important to do so without damaging the stacks. In this initial phase, we tested the PCS (Power Conditioning System), along with all the control strategies around it. Even though the plant was not generating power from Hydrogen at this moment, the rest of the system was operating as it would with the stacks. With the help of a DC source the real response of the fuel cells was also simulated.

Initial results show great response both in time and accuracy, complying with the energy request with just an error of 0.25%. The control system evaluates the energy request and translates it into a power setpoint that the plant will follow. Several variables accumulate and evaluate the produced energy along time. Allowing the plant to compensate for any mismatch. In the image below a typical response of the plant can be observed. From warm stand-by, the plant immediately responds to the energy demand. The control ensures that the total amount of energy exported matches the requested.

But all of this is only but a fraction of the tests carried out in this first phase. In the following weeks we will install the fuel cell stacks in the plant and power production will begin. Starting the second phase of FAT. 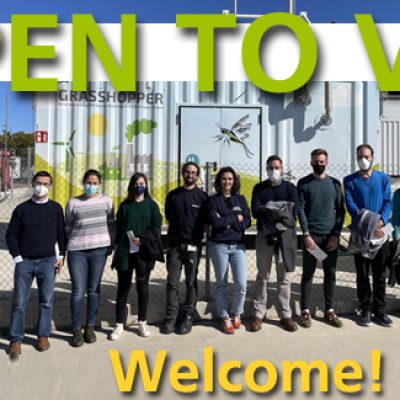 The pilot plant is OPEN to VISIT. Don’t miss out! 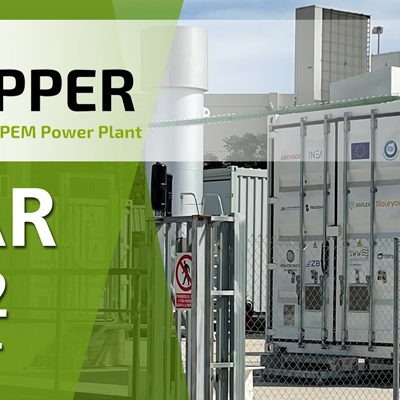 Project webinar – It is time to meet the team